Advice for AHAT members and beekeepers: Please read the COVID-19 and Beekeeping Update from the bee health policy teams in England, Wales and Scotland.

Possible Asian hornet sighting - what next? 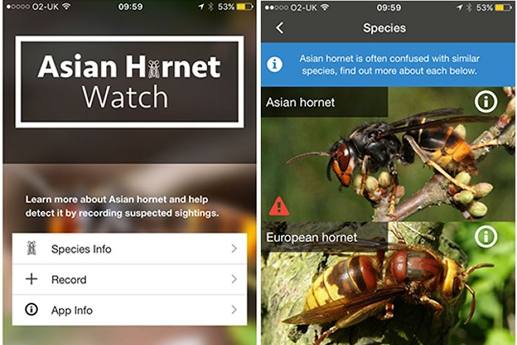 If you think you have seen an Asian hornet (Vespa velutina nigrithorax), the quickest and best way to identify and report a possible sighting is to use the Asian Hornet Watch app which has been designed to record and help the early detection of Asian hornets.

The app provides an identification guide to help check which species you have seen and an opportunity to record your sightings. Download free of charge from Google Play or iTunes.

Alternatively, report the sighting to the Non-Native Species Directorate but they will need a good photo for identification purposes before taking any further action.

You can also find your nearest Asian Hornet Coordinator using the British Beekeepers' Association interative map to contact them, but again they will require a photo for identification.

Biologists studying the Asian hornet (Vespa velutina) and Asian honey bees (Apis cerana) at the University of California in San Diego, USA have published new research that deconstructs the "I See You" signal that involves guard bees shaking their abdomens laterally, which increases as the threat intensifies.

The research suggests that visual recognition of Asian hornets appeared to be the main trigger for the signal instead of the Asian hornet's smell or sound and requires honesty within the highly co-operative bee colony to minimise false alarms.

Beekeepers and members of the public were asked to remain vigilant after an Asian hornet (Vespa velutina) was spotted in the Gosport area of Hampshire. The National Bee Unit confirmed the sighting and monitoring commenced to detect any other Asian hornets in the vicinity.

This is the first confirmed UK sighting since October 2019, when two related nests were detected and destroyed near Christchurch, Dorset.

Devon Beekeepers’ Asian Hornet Action Teams (AHATs) are responding once again to help stem the incursion threat from the Asian hornet which has been sweeping through Europe since 2004 and most recently the Channel Islands.

Devon branches will be joining with similar AHAT teams throughout the UK for another National Asian Hornet Watch Week running from 7th-13th September 2020.

Many of us are aware of the threat to our bees and to all our other pollinating insects from the Asian hornet (Vespa velutina). At this time of year, over-wintering queens may be coming out of hibernation and as part of a county-wide initiative to raise awareness of the problem, we are asking beekeepers and the general public throughout the country to help by setting up bait stations and to spread the word.

Please help to prevent this invasive non-native insect becoming established in the UK.

With the first Asian hornet (Vespa velutina nigrithorax) of the year being found on Sunday (2 February) by a member of the public in St Brelade, Jersey after being disturbed from hibernation, it's a reminder to us all to start thinking about monitoring for these non-native insects here on mainland UK.

The first Asian hornet (Vespa velutina nigrithorax) of the year was found on Sunday 2 February 2020 (first confirmed sighting in 2019 was 6 February) by a member of the public in St Brelade, Jersey after being disturbed from hibernation. The insect was reported with a photograph which confirmed the sighting.

That is the question islanders on Jersey are being asked in their fight to contain the spread of the Asian hornet (Vespa velutina nigrithorax) since 2016 when the first Asian hornet was confirmed. This follows the confirmed sighting of an empty nest discovered on Christmas Eve after potentially releasing dozens of queens, which may go on to form new nests in the spring. Asian hornet volunteers are now undergoing training to detect Asian hornets and Islanders have been urged to play their part.

On Saturday 25 January 2020, approximately 150 beekeepers from across the South West of England met in Bridgewater, Somerset for the first Asian Hornet Convention and Training Day. The event was organised by the Somerset Beekeepers' Association on behalf of the South West Beekeepers' Forum, providing an opportunity for Asian Hornet Action Teams and beekeepers interested in finding out more about Asian hornets to come together for a practical training day and hear about current research.

On Tuesday 3rd September 2019, an Asian hornet (Vespa velutina nigrithorax) was found alive in Hamburg, Germany which roughly has the same latitude as Manchester here in the UK. So far this is the northernmost occurrence of this originally South-East Asian species in Europe and in the world.

​Our news in the UK has been dominated by Brexit. Whether we remain or leave, it makes no difference to the Asian hornet (Vespa velutina nigrithorax). With 17 confirmed sightings in England since 2016, we must stay vigilant. If the Asian hornet gets a foothold in Britain, we will join other countries in Europe that are suffering economic losses - that's a fact. In a 43 page report published by the European Commission in September 2019, Invasive Alien Species represent a major threat to biodiversity in Europe and worldwide and can cause significant damages to the ecology, economy and livelihood of countries affected.