New weapon against the Asian hornet

Dr Xesús Feás from the University of Santiago de Composte and his research team have been successful in creating a new weapon against the Asian hornet.

The Asian hornet (Vespa velutina nigrithorax) should be a worrying concern for all, not just beekeepers because this invasive species is a predator of various insects including pollinator insects. It is a fast spreading, highly aggressive predator. It has the ability to cause significant losses to honey bee colonies and potentially other native species and has been identified as a high-risk non-native species due to their threat to native biodiversity. 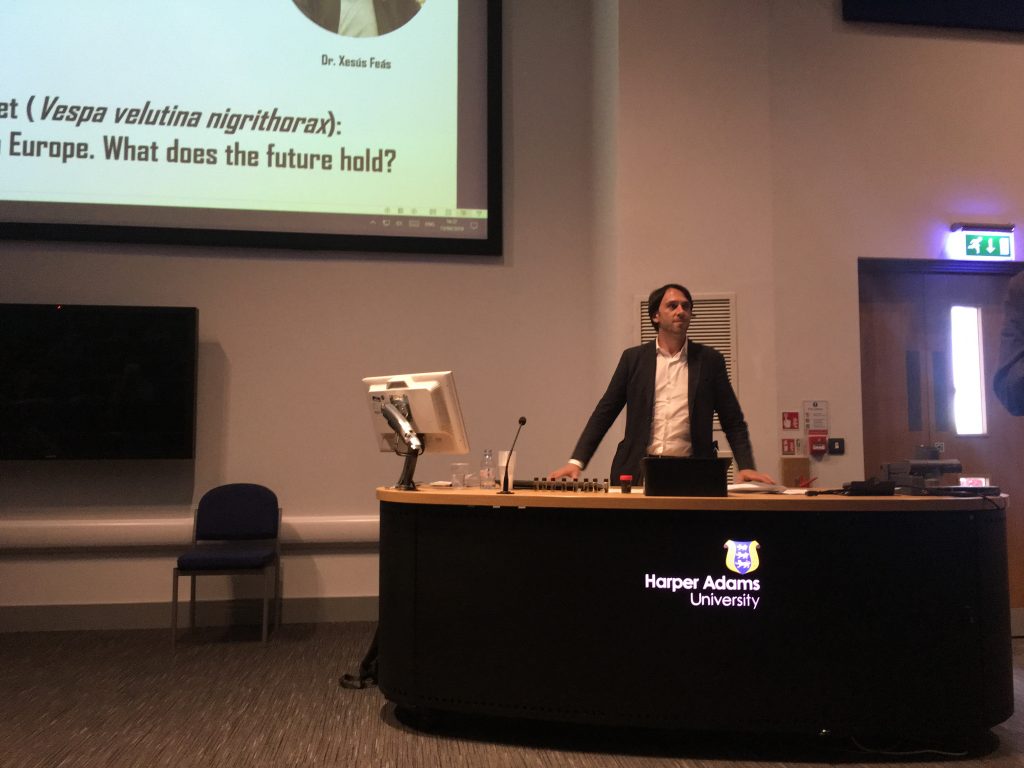 Dr Xesús Feás is a scientific researcher with a keen interest in the observation of the invasive Asian hornet and has been investigating methods for controlling the species.​

Recently the team have been successful in producing the Asian hornet’s sexual pheromones and has started testing in the Channel Islands.

Dr Feás is a member of The Velutina Task Force of COLOSS Association and gave a talk in March 2019 at the University degli Studi di Torino on Vespa velutina and other invasive invertebrates species. He also gave a lecture for the British Beekeepers’ Association at Harper Adams University in April 2019 entitled “The Asian Hornet (Vespa velutina nigrithorax): an exotic predator in Europe. What does the future hold?” where he discussed his work and recent research conducted by Wen, Ping et al. that showed evidence for Vespa velutina gyne-produced sex attractant pheromones that mediate attraction of males.

About the Asian hornet

The Asian hornetis naturally distributed in Southeast Asia, India and China, however it was first detected outside of their native range in South Korea during 2003 and later in France in 2004.  It is soon to be recognized as a Pan-European threat later being detected in other areas (Spain in 2010, Portugal in 2011, Belgium in 2011, Italy in 2012, Germany in 2014, Netherlands in 2018, Majorca in Balearic Islands in 2015 and England and Channel Islands in 2016.

Much of the feeding of the Asian hornet colonies is based on bees and other insects, and although the impact they may have on the wild insect population is still unknown, it has become a major threat to beekeeping and to the pollination service. However it is not only an issue for beekeepers. Other productive sectors (forestry, fruit growing and viticulture) human health and social activities, both in rural areas and cities, have been affected to a greater or lesser extent.

Although the destruction of nests is the most effective measure to control the expansion and damage of the species, one of the most used methods at present is the trapping of specimens, based on the placement of entomological traps, which also allows collect information to know the presence, distribution and evolution of the species.

Insect pheromones are used as messengers that affect the insect behaviour. One of them are the Sex Pheromones, to attract adults of the opposite sex for mating. Insect pheromone is famous of its high efficiency, non-toxicity, no pollution, no harm insects and other advantages. Pheromones can be used to control different lives phases of pests in the following aspects:

Monitoring: Detecting the presence of the mating period, indicating the level of infestation and evaluating the most suitable treatment and application time.

Mass trapping: Capturing the highest number of insects in a trap to reduce or eliminate damages caused.

If you would like to find out more information about this research, please contact Professor Feás and his team.