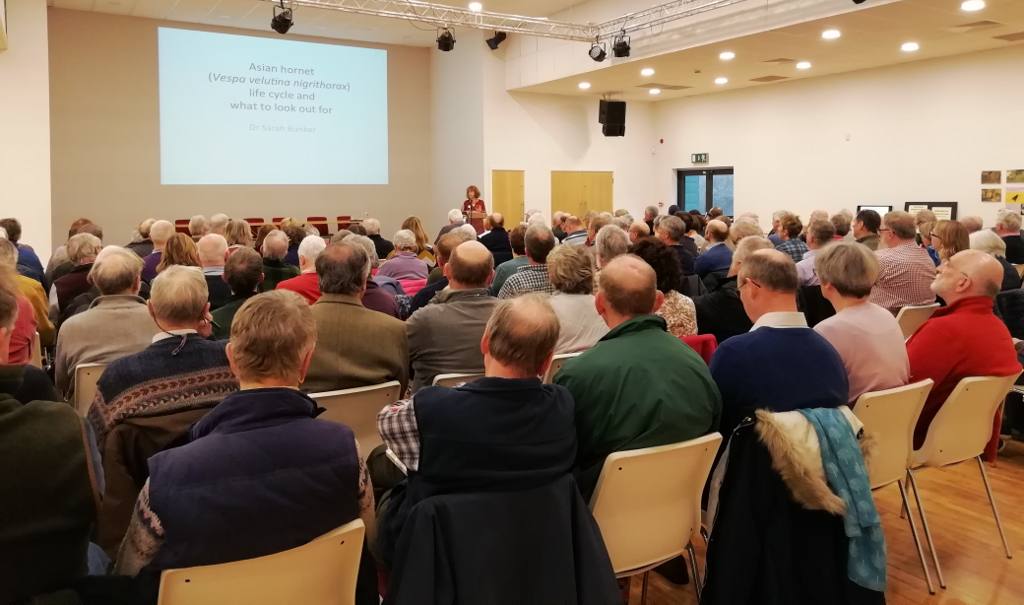 On Saturday 25 January 2020, approximately 150 beekeepers from across the South West of England met in Bridgewater, Somerset for the first Asian Hornet Convention and Training Day.

The event was organised by the Somerset Beekeepers' Association on behalf of tghe South West Beekeepers' Forum, providing an opportunity for Asian Hornet Action Teams and beekeepers interested in finding out more about Asian hornets to come together for a practical training day and hear about current research from the following speakers:

Sarah Bunker, entomologist and author of The Asian Hornet Handbook. Sarah has been a beekeeper in Devon for many years and is passionate about insects. She gained experience tracking Asian hornets in Jersey and on her return, she felt compelled to write this practical handbook to inform beekeepers and others about Asian hornets. The presentation included an insight into the insect's lifecyle:

Alistair Christie, was appointed Jersey goverment's Asian Hornet Coordinator in 2019 to help eradicate the Asian hornet from the island. Alistair has over 15 years' beekeeping experience and is working on a strategy to try and save the island's biodiversity, honey bees and the public from the invasian of Asian hornets where in 2019 alone, there had been 80 confirmed sightings in Jersey.

Peter Kennedy, insect ecologist at the Environment and Sustainability Institute, University of Exeter, talked out his current research on Asian hornets looking at measuring and modelling the new emerging threat to managed and wild pollinators as well as an EU-funded project looking at the conservation of Atlantic pollination services and control of the Asian hornet.

With the south west being on the frontline in terms of a possible invasian of Asian hornets, the event was an opportunity to be more prepared and find useful ways of working together, not only in beekeeping branches, but reaching out to organisations and the general public to help in what ways they can to spot and report sightings.