The annual lifecycle of the Asian hornet (Vespa velutina nigrithorax) begins around February/March when the queens that were mated in the autumn before come out of hibernation and start to build their paper nests (normally the size of a tennis ball). At this stage, it's very difficult to tell the difference between a wasp's nest and an Asian hornet's nest as the entrances for both nests are at the bottom and therefore look similar.

It is this queen alone that builds this first nest around March/April, lays eggs and feeds the larvae when they first emerge. 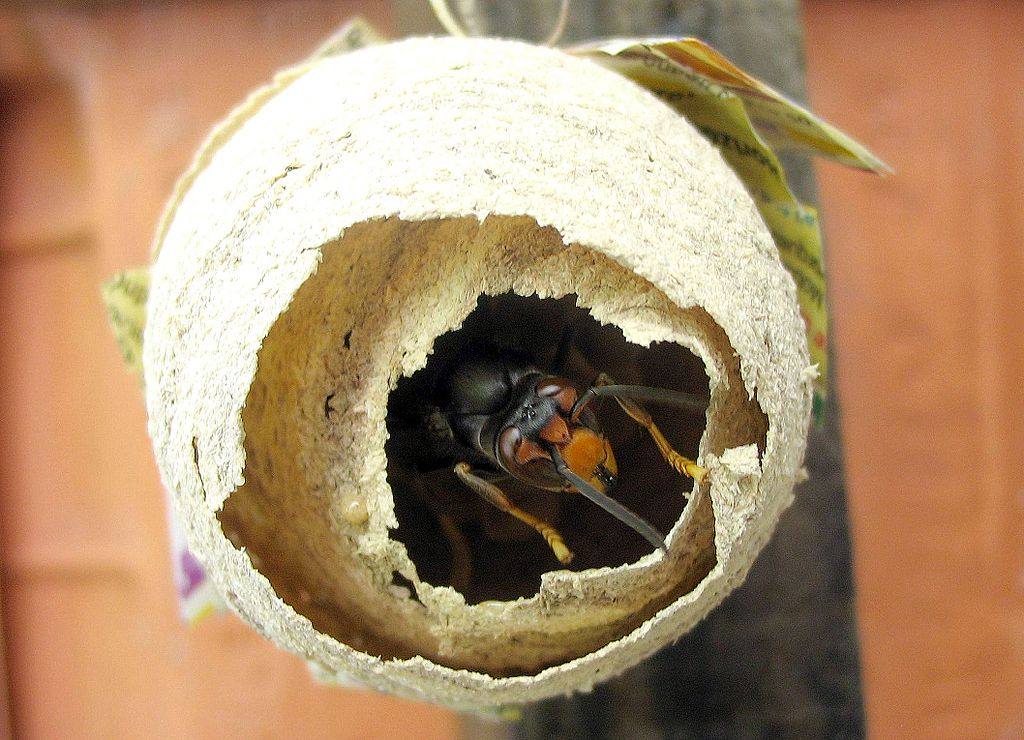 The first nest the queen has built is known as a primary nest.

When the first generation of workers reaches the adult stage and numbers in the nest reaches 50-100, they may build another nest not very far away. This second nest is often in a higher place but they are also being found in hedges, brambles - even cliff tops.

This second nest is called the secondary nest and tends to be built between the months of May-July and will be home to the Asian hornet colony through to the winter.

With her workforce building in numbers, the queen concentrates on laying eggs while the workers continue to build the nest in size for more space to raise more hornets.

Research has revealed that secondary nests tend to have their entrances on the side of the nest and around 70% of Asian hornet colonies will relocate to the secondary nest.

It is at this time of the year that the workers also start visiting flowers and trees to bring back nectar for carbohydrate and prey on other insects for protein to feed the larvae back in the nest. 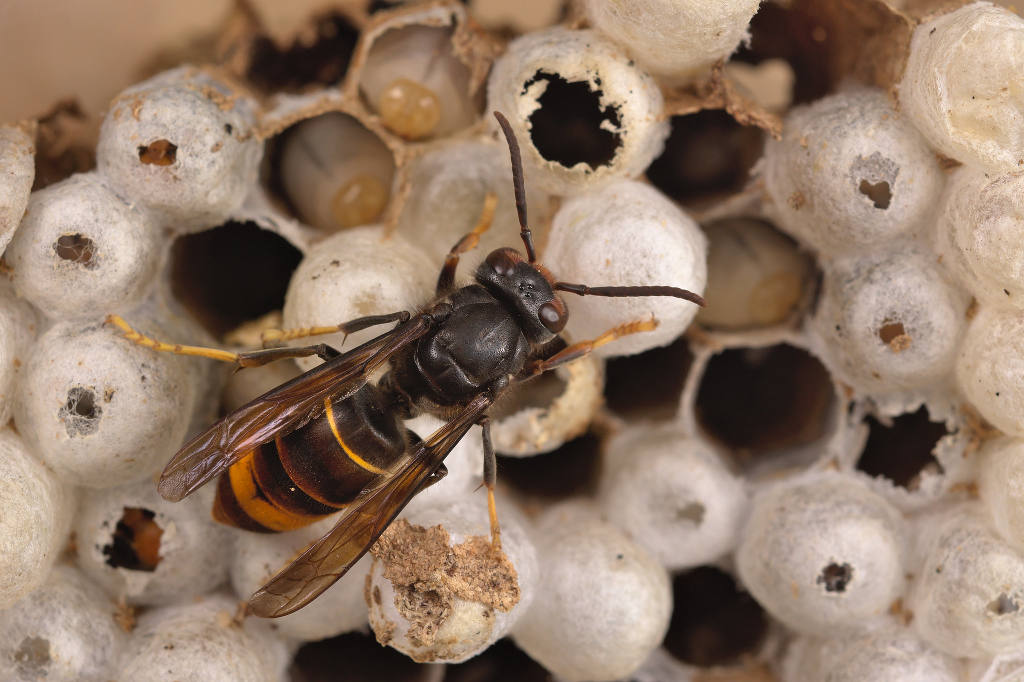 With the size of the Asian hornet's nest at its maximum in August-September, the workers prey on many insects and it is at this time of the year that honey bee colonies are at their most vulnerable because they are an easy source of prey. Each Asian hornet is capable of taking 25-30 honey bees a day back to the nest.

The first reproductive adult Asian hornets emerge around September/October with the males emerging first followed by all the new queens. The lifespan of the males is very short as they die once they have mated with the new queens.

With no new Asian hornets emerging, the size of the colony inside the nest gradually reduces and the newly mated queens fly the nest to find somewhere to hibernate over winter. Any remaining hornets in the nest will die as the temperature begins to drop and the lifecyle of the Asian hornet comes to an end for that year. 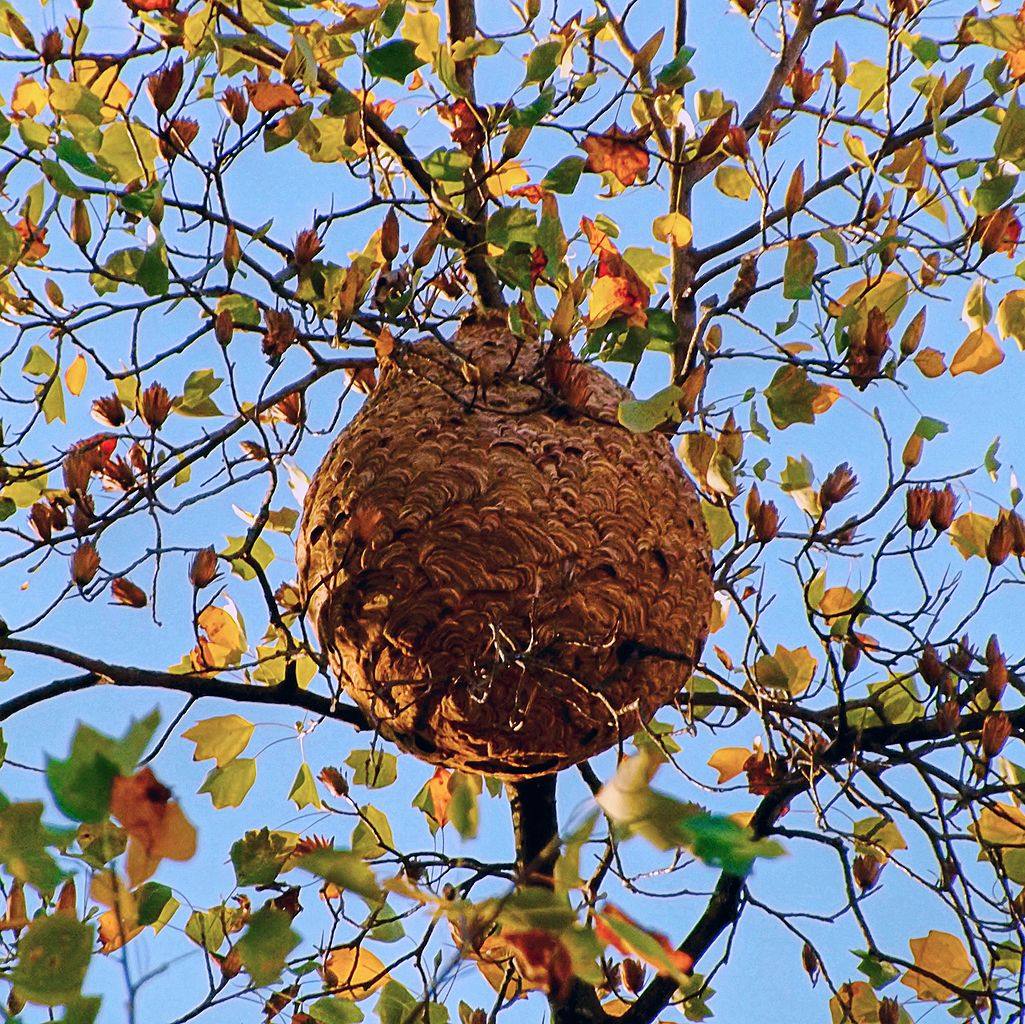 Asian hornet seconday nest built at the top of a 10 metre tree
which only became visible in the autumn
© Paula Jorge Wiki Commons (CC BY-NC 4.0)

In their native range, Asian hornets mainly hunt the eastern honey bee (Apis cerana), which has evolved a strategy of avoiding hovering hornets by rapid entry and exit from the hive when hornets are about. The guard bees also ball hornets to death. However, our western honey bees (Apis mellifera) have not learnt this behaviour and withdraw into their nest and become very distressed. The bees are so terrified that they will no longer fly out of their beehives and the queen will stop laying. The colony will become weaker and weaker and, eventually, will collapse and die.